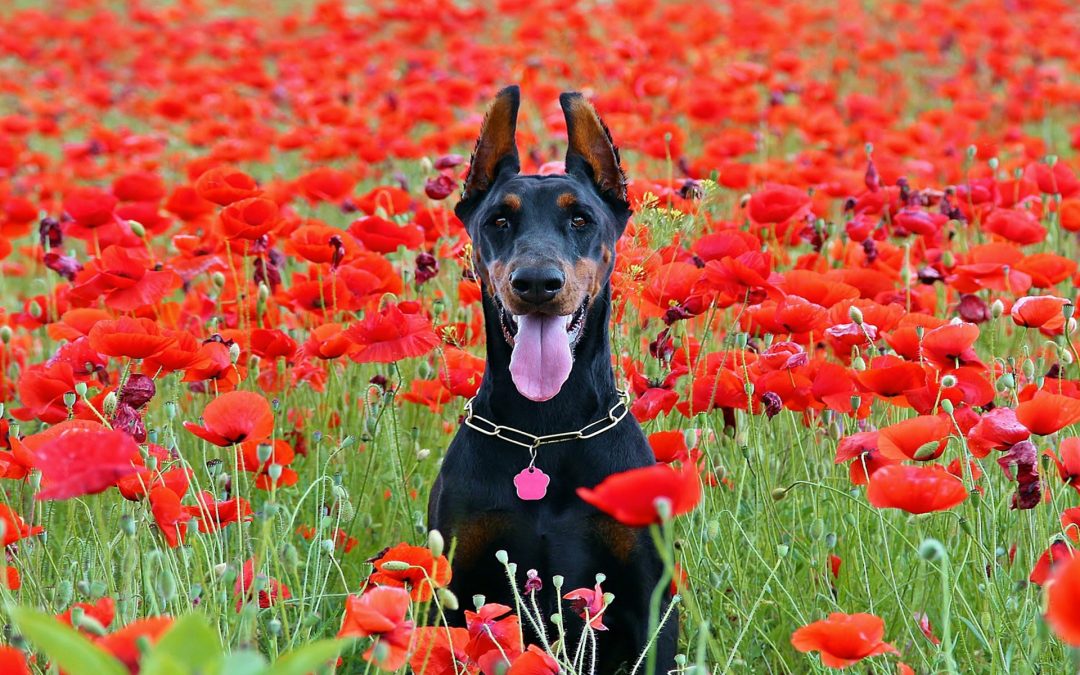 On 11th November 2018, the world commemorates a very special Remembrance Sunday. It is 100 years since the guns fell silent on the Western Front, signalling the end of the First World War and the start of the Armistice. We proudly pay tribute to all our military heroes, past and present.

However, it’s not only the bravery of the soldiers that we want to celebrate here. Throughout history, animals have accompanied armies into combat. So we’d also like to salute the courage and devotion of 16 million animals that served as modes of transport and communication, protectors and companions. These animals were a crucial part of the war effort.

Some eight million horses, mules and donkeys died in the Great War. Over one hundred thousand pigeons were used to carry messages. Other creatures were enlisted too, such as elephants, camels, monkeys, oxen, bullocks, cats and canaries, all used for their various natural instincts and strengths, to carry water, food, ammunition and medical supplies, detect poisonous gases or hunt vermin. Dogs, cats, even monkeys, were also kept as pets and mascots to raise morale and offer companionship.

Hemera Holidays is a business that loves dogs and warmly welcomes all four-legged friends to enjoy a holiday with their human companions. In this poignant week, then, we particularly remember that over twenty thousand dogs also served alongside British troops in the First World War, aiding the war effort with their innate intelligence, devotion and loyalty.

Dogs fulfilled many roles in the conflict, working at great risk right on the front line, alongside the troops. They were relied upon to run messages, lay telegraph wires, detect mines or gas in trenches, kill rats, dig out bomb victims, perform sentry duties or search and rescue operations, and act as guard or patrol dogs. Many battled on despite horrific wounds and in terrifying circumstances to the limit of their endurance, showing indomitable courage and supreme loyalty to their handlers.

With their keen sense of smell, dogs could seek out soldiers and civilians in need of assistance. Search and rescue dogs could venture into No Man’s Land to locate the wounded. They carried water and medical supplies to men out of the reach of ambulances and could lead stretcher parties to the stranded.

Guard dogs were employed to watch over militarily important locations – such as railways, bridges, defence installations and ammunition stores – and warn of trespassers. Scouting dogs silently alerted handlers to the presence of enemy troops.

Dogs were used for the dangerous job of running messages. They were faster than humans, were less of a target, and could travel over any ground. Vehicles could break down and soldiers had heavy uniforms and equipment, meaning they could easily be targeted by enemy fire. Not only reliable, dogs also served to remind soldiers in the trenches of home, providing comfort in otherwise horrific conditions.

A dog training school was set up in Scotland and one of its recruits was sent on a mission along the Western Front to deliver an important message to brigade headquarters. The dog travelled over 4000 metres across difficult terrain in less than 60 minutes and got through when all other methods of communicating with HQ had failed.

The photo below shows a dog handler from the Royal Engineers (Signals) reading a communication brought by his messenger dog, who swam across a canal to deliver it. It was taken at an Army Veterinary Corps HQ Kennel, near Nieppe Wood in France on 19 May 1918. 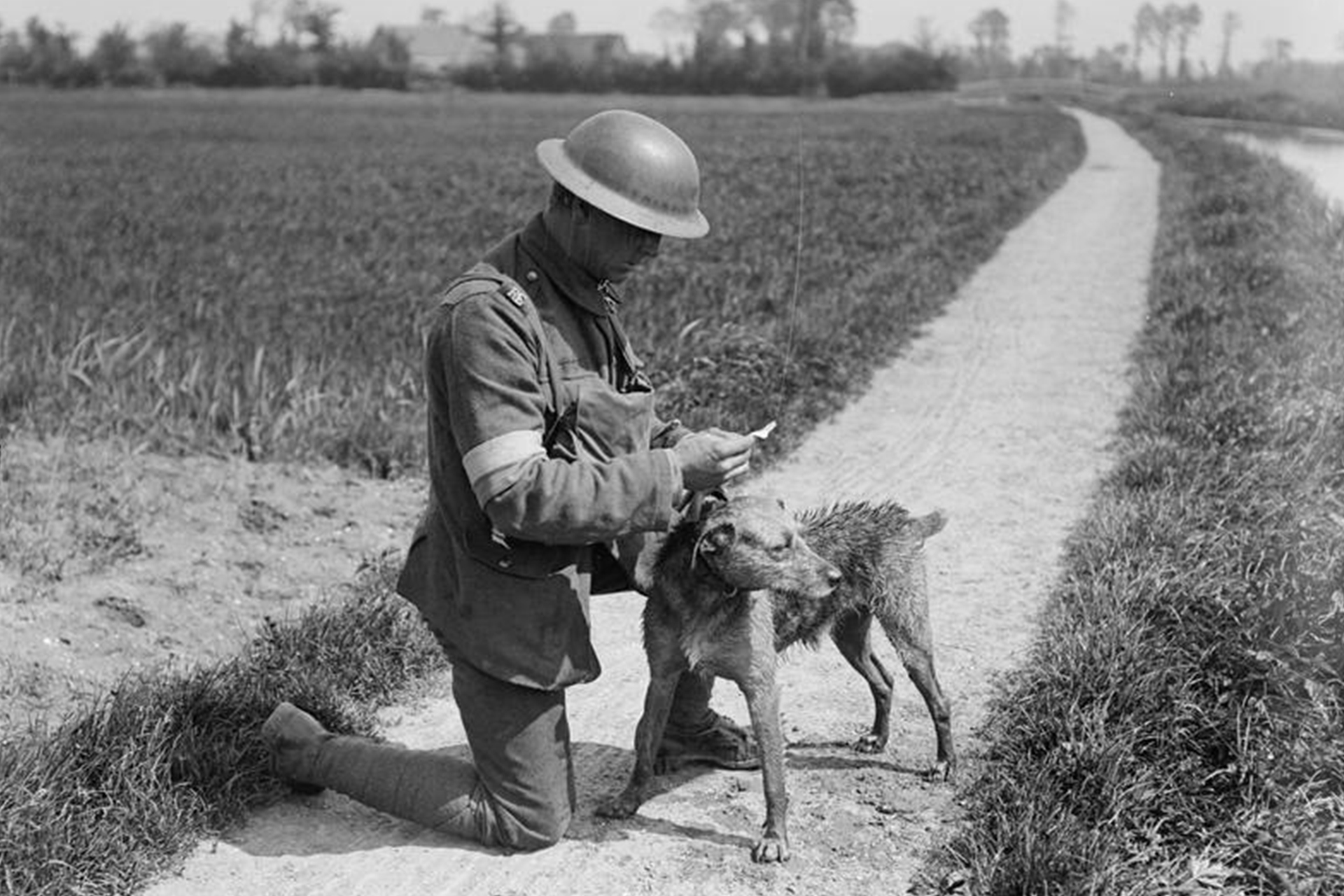 Conditions in the trenches encouraged disease-spreading pests, particularly rats attracted by food, waste and dead bodies. Dogs and cats were often trained to hunt vermin and help maintain trench hygiene. In the photo below, a pet dog of the Middlesex Regiment proudly poses with its catch of rats in the trenches on the Western Front. 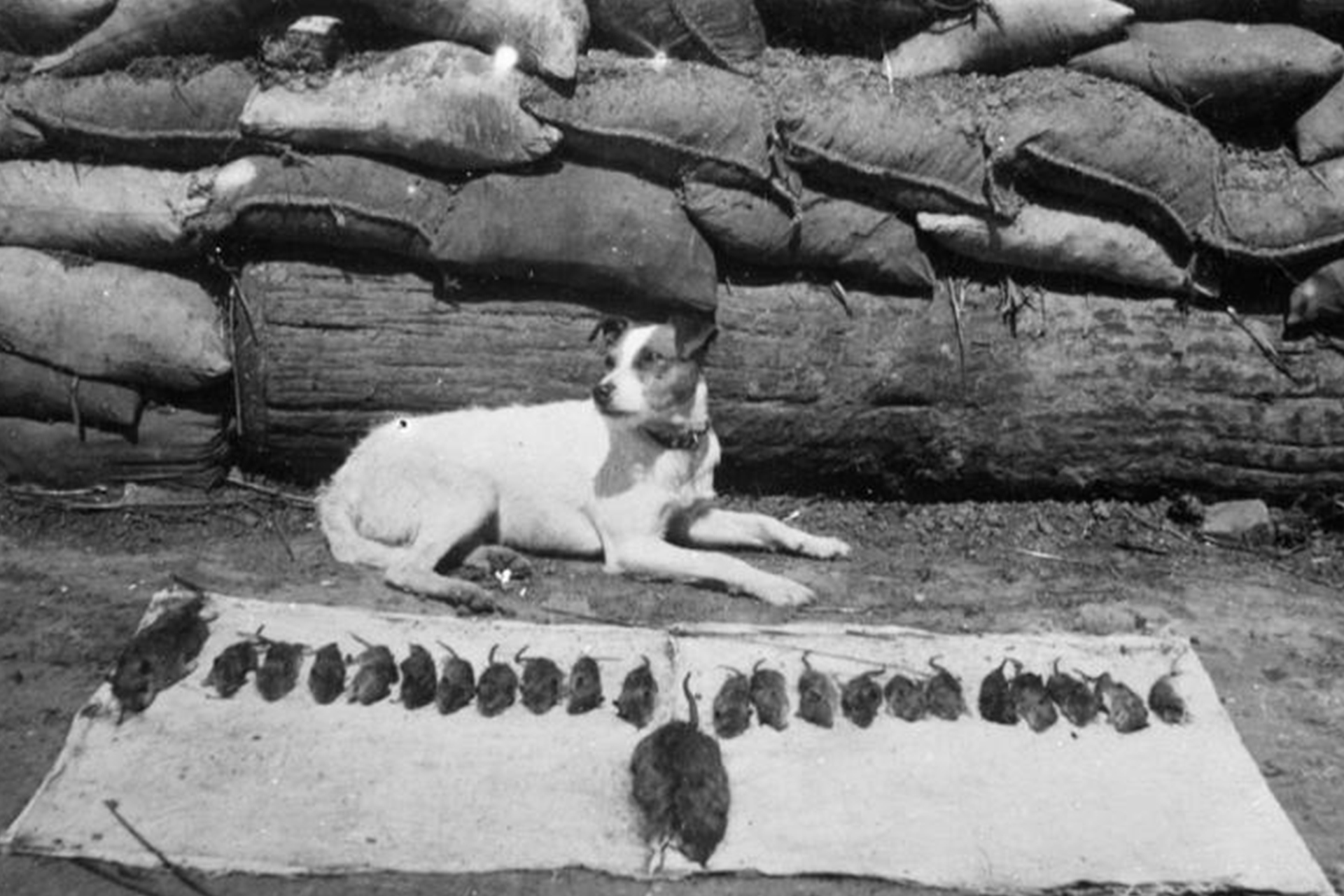 It wasn’t just the British who used animals to support the war effort. The Belgian army, for instance, used dogs instead of horses to haul big guns. Animals have continued to play their heroic part all around the world in other conflicts too, including the Second World War and Korea. To this day, many are still used in places like Afghanistan’s Helmand Province, to locate improvised explosive devices (IEDs).

There are well documented and amazing stories of animal valour and several books have been written about their incredible bravery. Here are a few tales to warm your heart.

In the bloody Battle of Verdun, one French unit was ordered to stand its ground until relieved. In the ensuing chaos, they lost communication with command. Low on ammunition and fearful of survival, the regiment’s messenger dog Satan helped to save the day. They saw him running towards them, but the Germans opened fire and wounded him. Satan pushed on through a hail of bullets before reaching the trenches. On his back, a box contained two messenger pigeons. The birds were released with details of the Germans’ position. One bird was shot down, but the other flew back safely and the French were able to locate and save their unit.

Mutt was a YMCA cigarette delivery dog with the US 11th Engineer Battalion. His unit was forced into combat after the Germans overran British front lines, but Mutt kept up morale. He provided a welcome distraction by running through the trenches, helping to calm nerves and bring soldiers cigarettes. Despite being wounded twice, Mutt bravely survived.

When the 102nd Infantry Regiment was training at Yale in July 1917, a local stray attached itself to the group. Deployed to France, the dog was smuggled abroad with them and went into battlefield training. Wounded in April 1918, ‘Sergeant Stubby’ comforted and inspired comrades in hospital, before being sent back to the trenches. He could recognise gas attacks and offer a few minutes warning, giving men time to put on masks. Once, he captured a German soldier all by himself and even became embedded with French forces for a while after getting separated from his unit. Stubby returned to the US after the war and became an official mascot. He retired, then died in 1926.

American soldiers adopted a stray terrier in Paris and christened him Rags. One sergeant taught him how to deliver important messages, which helped saved hundreds of lives. He would flop to his side, to alert his companions of incoming artillery fire and had a talent for finding wounded men on the battlefield. Wounded himself, he retired from service and after the war was adopted by a military family. He lived to be 20 and was buried with military honours at Aspin Hill Memorial Park, Maryland.

A 1914 newspaper article tells how Tom, a French ambulance dog, saved the life of a French soldier. The soldier was paralysed by a head injury and with a severe arm wound. A bullet in his jaw prevented him from alerting medics. Pinned down by the corpses of other soldiers, he had almost lost hope when, suddenly, he felt a wet nose on his brow. Tom sensed life in the stricken soldier and raced to get help, saving his life. His was not the only life Tom saved, and he became a valuable member of his unit.

In 1915, the HMS Formidable was sunk in the English Channel. Over 500 men died, including the captain and his fox terrier Bruce. When Bruce’s body later washed ashore, he and his owner were buried with full military honours. Hundreds of survivors and dead alike were picked up, so local hospitals were overwhelmed. One publican offered to store corpses temporarily in the pub’s basement. Lassie, a local cross-bred collie, stayed by the body of one man and would not stop licking his face. The sailor, thought to be dead, was in fact just barely clinging to life. With Lassie’s attention, he was found, revived and taken to hospital where he made a full recovery.

A unit of the British Sherwood Foresters became separated and encircled by German troops. Their only hope was Jack the Airedale Terrier. He was despatched off to HQ with a message tied to his neck. He managed to avoid most of the German firepower along the way but, sadly, was hit twice by bullets before reaching his goal. Even so, he managed to crawl for the rest of the journey and reached the British trenches before dying. His message was delivered and the battalion saved.

A stray called Philly was adopted by soldiers stationed near Middletown, Pennsylvania. She shipped to France with them and joined them in the trenches, suffering wounds and gas attacks. She was such an excellent guard dog that a bounty of 50 Deutsche Marks was put on her head by the Germans. Philly survived the war and returned to the US, where she died aged 15.

As we celebrate this most important Armistice Day, it is only right and proper that we take time to honour fallen heroes, as well as the injured and survivors from every war, every conflict, all of whom sacrifice so much on our behalf. But, just for a moment, let’s also salute those wonderful animals who played their part too and be thankful for their courage, service and devotion. We will remember them.